Black Lightning Strikes As Eternus, Blade of the First Prince Storms Into Battle

A grim dirge backs a martial drumbeat as the Slaves to Darkness march from the Eightpoints to reave the Mortal Realms in the name of the Everchosen. However, not all of these armour-clad warriors are loyal to the Three-eyed King. Some serve a more subtle master…

Descending from the sky in a bolt of black lightning is Eternus, Blade of the First Prince. 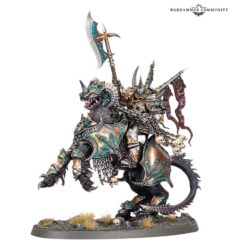 The Blade of the First Prince was once one of Archaon’s Varanguard – a champion of the Eighth Circle known as Atarus. When he renounced Archaon at the feet of the Dark Master, he was thrust into lightning-wracked Cursed Skies that swirl with the souls of slain Stormcast Eternals, unable to return to Azyr.* There he was burned alive by this divine lighting, only to be revived by Be’lakor – who breathed those trapped souls into him.

Reborn as Eternus, this warrior pays for his immortality with undying fealty to Be’lakor. Yet this gift may be plucked from the so-called lord of traitors just as quickly as it was conferred – so Eternus wages a desperate campaign to keep his master satisfied, using spies and covert agents to further Be’lakor’s plan to usurp Archaon as the Exalted Grand Marshal of the Apocalypse.** 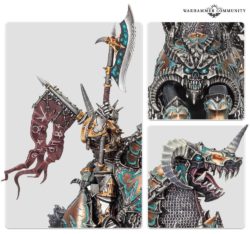 Those not turned by his unnaturally-persuasive words are put to death in battle. Atop the mighty Drakocephalus, clad in armour stripped of the colours of the Everchosen and armed with a deathglaive and skull flail, the Blade of the First Prince crushes any who may oppose the will of his Dark Master.

If by some turn of fate Eternus is slain, he is reborn in the foul storm-shroud of Be’lakor’s Cursed Skies before returning in a blast of obsidian energy, his crackling Veins of Black Lightning a cruel parody of the Heldenhammer’s chosen warriors. 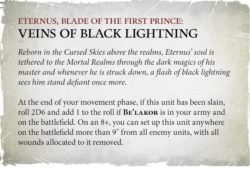 * The Cursed Skies were formed in Broken Realms: Be’lakor, just one sliver of his scheme to conquer the Mortal Realms.

** Say what you like about Be’lakor, he certainly has pithier sobriquets.