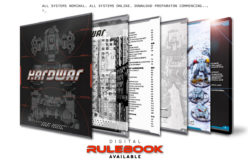 This is a downloadable PFD format product.

This product is being sold under a Non-Commercial License. By buying and downloading this product you agree with the terms of the license.

Remember about registering an account with the purchase of the PDF, to have access to updates in rules and receive a 10% discount for the hard copy of the rulebook!

The turn of the twenty-second century was a time of great progression of the human race, space exploration, scientific and technological advancements. It was also the time of neo-colonialism, and a new order emerging from the pyres of the old world. It was a time of a new breed of war – the Hardwar.

This book will focus mainly on that last aspect, hardwars, and how they were fought. The form of tabletop miniatures game appears to be an ideal medium for an immersive experience of future battles.

Becoming a force commander in the Hardwar world is not a difficult task. You can start your own private security company, lease a few war machines and go out there, looking for contracts from the big fish. You can be a corporate commander, working for one of the major forces of your world, executing the will of shareholders by all means necessary. You can become the charismatic leader of revolutionary forces, fighting against corporate overlords. You can be a small-time dictator in an area of wastelands forgotten by transnationals, or a noble self-appointed marshal, trying to protect helpless civilians from raiders. You can be a pirate, you can be a bounty hunter, you can be a mercenary. All you need is to get your hands on some equipment, find a few reliable hardware operators and convince someone with money to let you solve their problem. If you are good enough, you can get additional contracts with media, to make a reality holo-show about your group, you can get sponsors from the arms industry, agents and lawyers to negotiate your contracts, and that penthouse mansion in the orbital city you have always dreamt of.