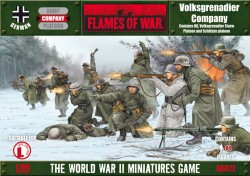 In the central sector of the Battle of the Bulge, the Germans had smashed through the American 28th and 106th Infantry Divisions before approaching the key crossroads town of Bastogne on 19 December. In the meantime the veteran 101st Airborne Division had been rushed from their camp in France to Bastogne to take up the defence. What followed was an epic seven-day struggle with the defending airborne troops besieged by four German divisions.

On 26 December the siege was broken by the arrival of the American 4th Armored Division and a few days later the Americans went on the attack.

However, the Germans were not done. On 31 December Hitler launched the last German offensive in the west, Operation Nordwind. German divisions along the Lorraine front attacked into the old French Maginot Line where the Americans had dug in. With many of their reserves sent north to face the Ardennes offensive, the Americans were taken by surprise.