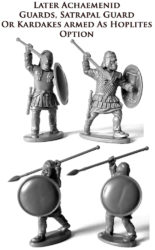 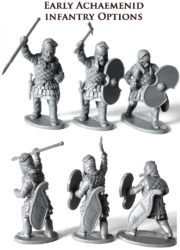 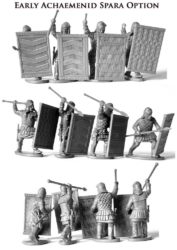 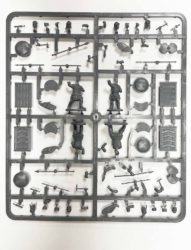 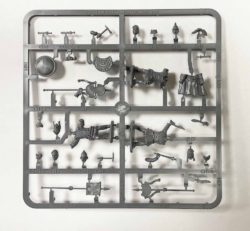 Here are some images showing the New Persian Armoured Spearmen. They are a versatile set and can portray Early or Late Achaemenid infantry.
If they are Early they would carry the Spara (The large wicker shield) and form a Spara wall in front of the massed ranks of archers behind. There is uncertainty as to whether the archers would simply be armed with bow and a hand weapon or would some be armed with bow and Spear as well? So there is the option to have unshielded spearmen but equipped with bow cases.
In the group shot image you will notice some unarmoured Spearmen are mixed into the unit. Some Persians wearing armour would still wear their tunic over the top so you can mix them together for more variety.
Also there is uncertainty as to whether some troops were multi-armed with spear, bow and shield? You have the option for this if this is your interpretation.
Later Achaemenid infantry options to represent either the Royal Guard, Satrapal Guard or Kardakes up-armoured to fight in the Hoplite style are included. Simply use the Large round Hoplite shield but you cold also mix in a few of the Crescent and fiddle shields as well for extra variety.
The Royal Guard infantry may have been armed with Spear shield and bow. Or may have been front rank spear and shield and bank ranks made of archers.
We have included all these possibilities and options for you so you can depict your way of representing the Persian infantry of the Early and Late Achaemenid Empires.
View here – https://www.victrixlimited.com/collections/new-releases/products/persian-aarmoured-spearman?utm_medium=social&utm_source=facebook&utm_campaign=new%20product%20-%20persians

This set includes 30 highly detailed plastic miniatures. Whether you’re using them as part of the Early or Late Achaemenid Empire, the Armoured Spearman are an essential unit in any Persian army. Use the formidable combination of spear and spara to keep your enemy at bay.